back to Watford Gift Card 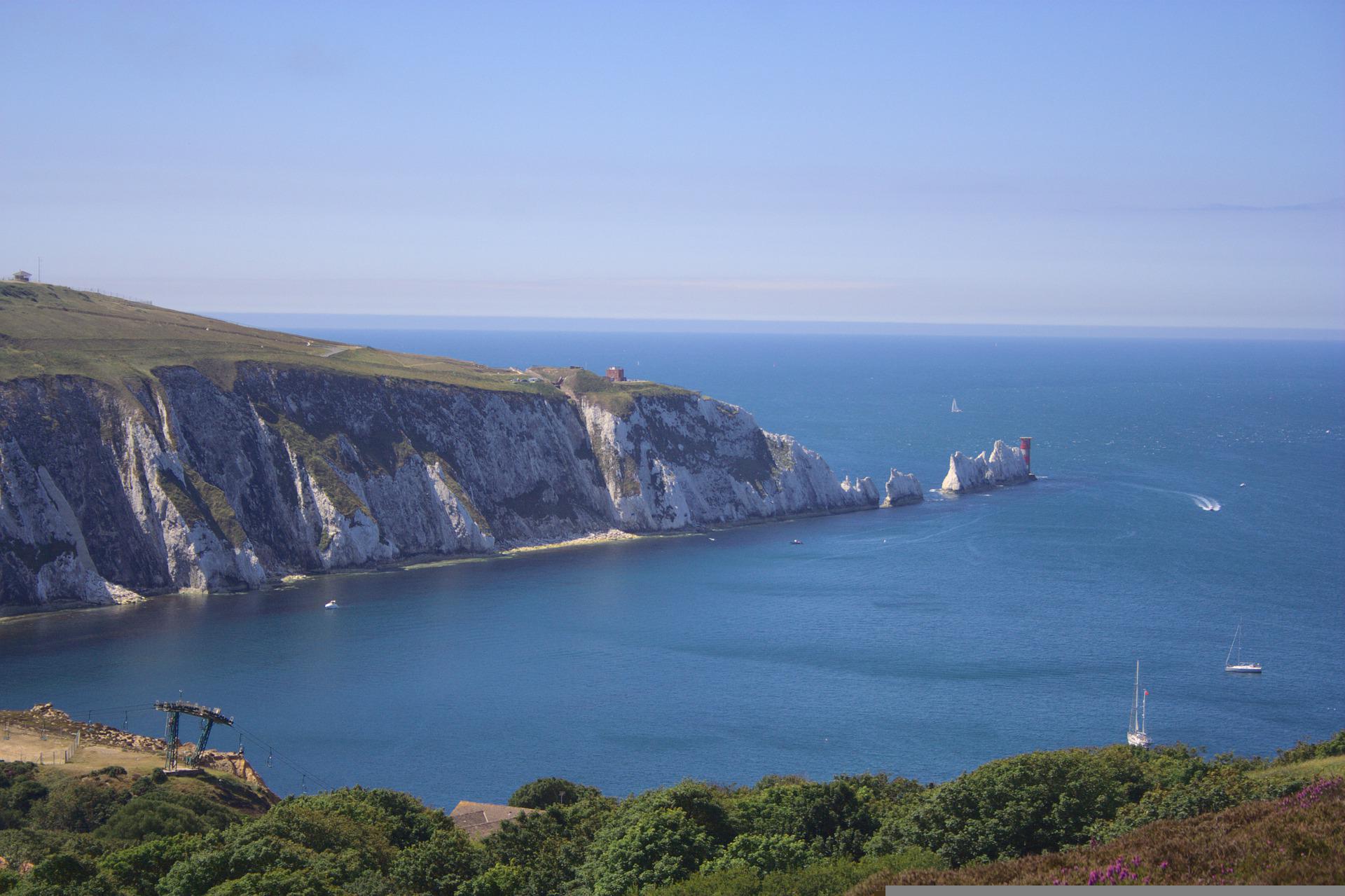 YouGov found that the average Brit is more likely to have jetted off to Paris or Amsterdam than to have visited many of the UK’s best known destinations. And yet, the British Isles is blessed with natural wonders, foodie havens, UNESCO World Heritage Sites, cultural hotspots and activities aplenty. From nature spotting in the Inner Hebrides to rollercoasters in the Isle of Wight, surfing in Swansea to the heritage trail in the Boyne Valley, the UK and Ireland have some of the best town and city staycation destinations. Whether you’ve got a week to spare or a weekend, here are 7 town and city staycation ideas to try out in 2022 – with staycations in the UK and Ireland to choose from!

1. Glamping and gorges in the Isle of Wight. A UNESCO Biosphere and home to The Needles, one of the Seven Natural Wonders of the UK, the Isle of Wight is a staycation destination for family fun and award winning beaches. Visit Blackgang Chine- the oldest theme park in the UK. See the lions and tigers at the Wildheart Animal Sanctuary, visit the ancient gorge of Shanklin Chine, or take in an open air concert at Rylstone Gardens. For places to stay on the Isle of Wight, try The Birkdale Hotel, a 4 star hotel in Shanklin. Or Godshill Park Farm, a working livestock farm offering luxurious self-catering accommodation in Godshill, an Area of Outstanding Natural Beauty.Take your pick of the Glamping Village or the quirky self-catering houses at The Gallops in Newport-set in 40 acres of countryside with first rate equestrian facilities. For a fascinating glimpse of history, stay at The Old Radar Station, a converted WW2 receiver station with sea views and located in the National Trust landscape of St Boniface Down. There are over 110 businesses to spend an Isle of Wight Gift Card.

2. Taking the Stairway to Heaven in Enniskillen. Ireland’s only island town, Enniskillen in Northern Ireland is a staycation destination for those who love history, culture and staying active. One of the best ways to explore the sights, like 600 year old Enniskillen Castle, is by Katakanu, a type of catamaran/canoe. As the sun begins to set, you can even hop aboard your very own light up hydrobike- a bike on the water- gliding across Lower Lough Erne. Upper and Lower Lough Erne are home to around 154 islands, and are one of the UK’s largest waterways. Hire a boat to visit historic gems like Devenish Island with its ancient monastery. Back on dry land, take on the Cuilcagh Boardwalk Trail, aka The Stairway to Heaven, to the glorious views atop Cuilagh Mountain. Or venture underground to the subterranean rivers and passages of the Marble Arch Caves. Stay close to the water at a cosy lakeside lodge at KillyHevlin, Lakeside Hotel and Lodges. And later, Enniskillen’s famous hospitality beckons as you head out to explore its many restaurants and eateries. Over 130 businesses are part of the Enniskillen Gift Card.

3. Family fun in Swansea. For the best of city living, seaside towns and stunning scenery, i 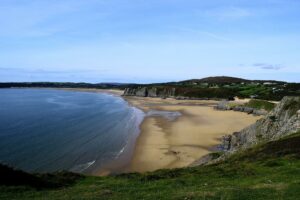 t has to be Swansea. The whole family will love Plantasia, a tropical zoo with over 40 species of animals; you can even feed the Caiman crocodiles! The National Waterfront Museum is free to enter and tells the story of industry and innovation in Wales over the past 300 years. For a bite to eat, try one of the city’s many independent eateries, like The Cwtch, famous for its specialty doughnuts. The walk home won’t take too long, as The Grand Hotel Swansea is right in the city. And if a beach staycation is on the cards for 2022, Swansea Bay has some cracking beaches. Like Rhossili Bay, a regular on the Wales’ top beaches lists (and dog friendly too), or surfers’ favourite Llangennith beach. Just a short drive from Swansea, the 19 miles of the Gower Peninsula are a haven for walkers. See the 60 plus businesses who are part of the Swansea Gift Card.

4. Cobbled streets and cool restaurants in Glasgow’s West End. Scotland’s cultural capital, and a UNESCO Music City, Glasgow is one of the best UK town and city staycation ideas for museums, shopping, and exploring. Head to the West End for Kelvingrove Art Gallery and Museum, one of Lonely Planet’s top 500 experiences in the world, and leafy Kelvingrove Park. Walk along the Clyde waterfront for the Riverside Museum and The Tall Ship Glenlee, and wander the quirky cobbled streets of Ashton Lane and Byres Road. Fancy sampling some of the best food and drink in Glasgow? Try The Ubiquitous Chip on Ashton Road where Scottish fare comes with a friendly Glaswegian welcome. There’s Hanoi Bike Shop, a Vietnamese canteen on Ruthven Lane (named as one of the coolest restaurants in Glasgow) and over 100 gins from around the world at BeGin on Byres Road. And for accommodation in Glasgow, it has to be the 100 year old Glasgow Grosvenor Hotel, an iconic city landmark. See more on the West End Gift Card.

4. Game of Thrones inspired adventures in Drogheda. Less than an hour’s drive from Dublin is Drogheda, the gateway to the Boyne Valley. The UNESCO World Heritage Brú na Bóinne and the tombs of Knowth, Newgrange and Dowth date back over 5000 years- older than Stonehenge and the Great Pyramids of Gaza. The area is awash with many Blue Flag beaches too, like Clogherhead, located in an Area of Outstanding Natural Beauty, and where you’ll often spot grey seals playing in the harbour. Take the Boyne Valley Garden Trail, the medieval Drogheda town walk or head further afield on the heritage trail driving routes. You can even have your own Game of Thrones inspired adventure with a boat tour across the River Boyne and Boyne Canal. Boyne Boats’ Irish boats- or currachs- were used right through the series. 2022 also sees the return of the Boyne Music Festival- in its 9th year- and celebrating chamber music, poetry and song. For the Irish country house experience, book into the Boyne Valley Hotel and Country Club, set in 16 acres of gardens. Or stay in the heart of Drogheda at the d hotel, all the better for exploring the town’s thriving food and drink scene. Check out the 170 plus businesses who are part of the Drogheda Gift Card.

5. Puffins, eagles and otters on the Isle of Canna. For the adventurous at heart, grab your binoculars and jump aboard the boat to 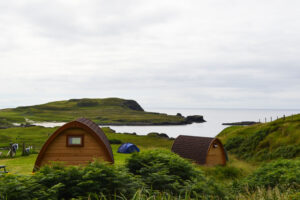 Canna, a Scottish Inner Hebrides island south west of Skye. Just 4.3 miles long, Canna is cared for by the National Trust for Scotland and is home to creatures like seabirds, porpoises and whales. Relax at Sanday Beach (it’s a favourite with the otters) or head to The Puffin Stacks, where hundreds of puffins gather during the summer months. Sticking with the nature theme, you can hire a cosy Puffin Pod for two, or an eagle and otter pod for four, all at Canna Campsite. They even have caravans, and a bunkhouse for groups wanting to experience Canna’s walking, climbing, and birdwatching. Then there’s the Tighard Guest House with three rooms all named after local landmarks. Part of the REDS Rural Gift Card.

6. Medieval marvels and boutique hotels in Hereford. A cathedral city with oodles of charm, Hereford is a quirky UK staycation destination. Visit 8th century Hereford Cathedral where St Ethelbert was buried. See the fascinating Chained Library reminiscent of Game of Thrones. And view the Hereford Mappa Mundi, a 14th century map considered one of the world’s great medieval treasures. Hereford has a thriving indie quarter. Have a wander down cobbled Church Street for unique businesses like Hey, Honey! Purveyors of all things bees. Don’t miss the Leftbank Village, for live music, food and drink on the banks of the River Wye. And home and lifestyle store Fox & Mabel in The Old Market is just the place for mooching. As for places to stay in Hereford, they don’t come much lovelier than the Castle House, a boutique hotel with views out over the old castle moat or Castle Street. They have an impressive restaurant serving afternoon tea and cocktails too. See over 110 businesses to spend a Hereford Gift Card.

For more town and city staycation ideas, check out all of our Town & City Gift Cards!

The best gifts for teachers 2022

7 town and city staycation ideas for 2022