back to Perth Gift Card 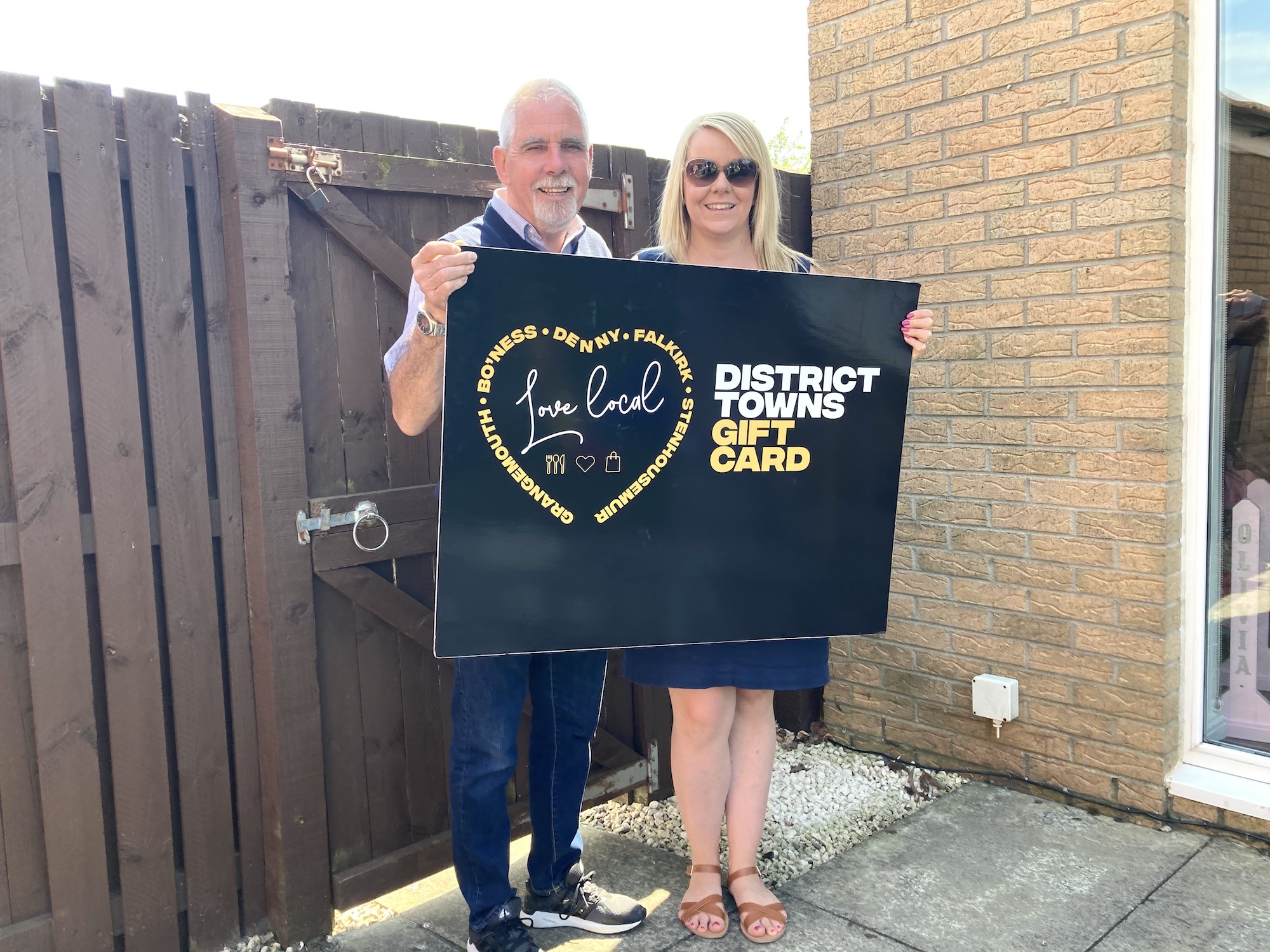 Three dads have received recognition as part of a national Father’s Day campaign to encourage people to support local this Father’s Day.

The dads, from Scotland, the North West and the South East, have also received a local gift card for their area- a District Towns Gift Card, a Chester Gift Card or a Watford Gift Card.

Cheryl Hogarth, 34, from Stenhousemuir in Scotland nominated her dad Charlie who suffers from a rare autoimmune disease. Charlie Allan, 64, from Grangemouth was first diagnosed with granulomatosis with polyangiitis (Wegener’s granulomatosis) in 2017 and went into remission. During the pandemic, Charlie and his family discovered the disease, which causes the blood vessels to become inflamed, had recurred. Shielding at home, and attending hospital appointments on his own, Cheryl says Charlie continued to put everyone else before him:

“When Dad was first diagnosed 3.5 years ago, it was awful. Wegener’s granulomatosis can be a life threatening disease, affecting the lungs, the kidneys, ears, nose and sinuses. We almost lost him. Finding out the disease had recurred in 2021 was heart-breaking. It was a really frightening time for the whole family, especially during the pandemic with worries about going to hospital.

“The experience was made worse by the fact that Dad had to stay at home shielding for so long, almost a year in total. It was hard for him and he became really down. We video called a lot, but we missed seeing him in person. Despite it all though, Dad continued to put mum, my brother and I, and the grandchildren first, telling us not to worry about him. This was my way of saying thank you for everything he has done for us.

“I look up to my Dad so much. When I was younger and going out for a night out, my Dad would say he was coming to pick me up. He didn’t mind if it was 2am, it was no trouble. That’s the kind of dad he is. We’re a really close family. When a family member is poorly, it does take its toll but we’re trying to live and enjoy every day as it comes, spending time together.

“Dad has had his two vaccines now and we’ve come out the other side. Dad is hoping to use his District Towns Gift Card to take mum out for a meal or maybe for some new clothes. When I ask my Dad what he wants as a gift, he tells me to save my money, so he can be tricky to buy for. The Falkirk District Town’s Gift Card is ideal in that way, he can choose his own gift.”

Goalkeeping coach Ben Wynne, 23, who lives near Chester in the North West set up free online football coaching sessions during lockdown, with guest appearances from footballing legends Chris Kirkland and Neville Southall, quizzes, talks on topics like mental health and a football based skills session.

“When lockdown closed usual coaching sessions, I started the online Zoom classes. We had 100 people at our first session, and people were joining from all around the country. Everyone has had their own problems during the pandemic, and I wanted to give as many people as possible the chance to get involved, kids and their parents too. It was really good getting people like Chris Kirkland, Neville Southall and Dan Watson on board, sharing their wisdom and experience. The kids were star struck, the adults too!

“There was a strong social impact, people wanted to see each other, talk and socialise as well as getting their skills training. We did sessions that everyone could join in with at home, and it was great to see parents joining in with the kids.

“I used to teach PE in schools before getting into football coaching, going to work for Liverpool F.C’s international side, travelling abroad to coach for the club. Running the online coaching sessions was a fantastic experience. I know from personal experience that looking after your mental health is so important, and keeping connected to others is a big part of that. It’s really nice to get this recognition as part of the Chester Gift Card Father’s Day campaign. Being a dad to my daughter Poppy, seeing her grow up and taking her on days out means the world to me.”

Dad of two Nick Conn was born and raised in Watford. Through his Instagram account and free YouTube therapy workshops, Nick spent lockdown supporting families who were struggling with addiction. It was Nick’s journey from addiction to recovery that led him to support others facing similar challenges:

“I didn’t have the roots in trauma that many people have. I went to a grammar school in Watford, later working at a local hotel whilst applying for the Metropolitan Police. It was around this time that I found drugs. I suffered with low self-esteem and had undiagnosed ADHD, and I felt the drugs helped me. Straight away, I knew it was going to be a problem. I went to Berlin for work and things escalated to the point that I was homeless, owing money to all kinds of people.

“At that point I called my family and admitted how much trouble I was in. They were brilliant and arranged a rehabilitation place. As I went through my recovery, I realised how many people are struggling to get help, and after building up relationships with the different centres, I set up Help4Addiction, a free service that offers guidance on addictions. We’ve helped over 3,500 people.

“Lockdown was hugely difficult for people and we had a 500% increase in calls and doubled our workforce. Perhaps it was secret drinking brought into the open, health anxiety or people losing their jobs. If they were using drugs or alcohol before lockdown, it escalated the problem. People would get in touch on my Instagram to ask for tips and advice, but I quickly realised I couldn’t help everyone, and that’s when I set up the YouTube therapy sessions, psychoeducational workshops focused on relapse prevention, especially for those that couldn’t afford or access rehabilitation.

“Dad in Recovery is my passion project, and a platform I can use to reach out and help dads, and others who are struggling. Identification is a huge thing, if you know someone has been through what you’re going through, it helps hugely. It’s really nice to get this recognition as part of the Watford Gift Card Father’s Day campaign. Watford has so much going on for families, great shops and restaurants. I’m just honoured that people feel comfortable enough to reach out to me to ask for help when they need it.”

Colin Munro is the managing director of Miconex: “Three dads and three very different stories, but each deserving of recognition and reward. As a dad myself, I know dads are very appreciative of socks as a gift, or any gift at all, but this year we’re asking people to think beyond socks and consider supporting local businesses in buying dad a local gift card. Town and City Gift Cards can be spent on a meal out with the family, a trip to the theatre, new clothes, books, even socks if that’s what dad wants. After the year we’ve had, local businesses need our support more than ever and a Town and City Gift Card does that, whilst giving dad choice.”

The last day for ordering Town and City Gift Cards to reach dad in time for Father’s Day is the 17th June 2021.